As mentioned in last week's editorial, Ming and I visited many showrooms at the 2015 AmericasMart Atlanta, although we only saw a fraction of what's there. It'd have probably taken a whole month to go through all of them!

While passing through we interviewed a couple of signing artists and noticed many interesting trends going on, some of which have been around for a while but some which seem to have the potential to branch out and develop more "new" directions.

ARTISTS AT THE MART

We met many fellow artists and took a few pictures to share with you all. Next time I will try to take more, although the lighting situation at the Mart and other meeting places is not in our favor, so I apologize if the images are not perfect.

Studio M had a great get-together with artists from around the country. It was so much fun to hang around with the very talented Ronnie Walter, artist, writer and agent for Two Town Studios and her husband Jim Marcotte, also a writer and agent.

Ming and I had fun talking to artist Patti Gay of Two Can Art about her new product lines at the Mart. Patti did an artist signing with C & F Enterprises, featuring her Two Can Art coastal pillows she designed in collaboration with her son Noah, who is autistic.

It was also a great pleasure to meet R.B. Hamilton, a self-taught artist who has won Best-in-Show and First-Place (in acrylic mediums) for his work in various art shows. His wife, interior designer Betsy Drake, has expanded his art to include pocketbooks, totes, towels, and designer pillows. Hamilton's original art, limited edition reproductions, designer pillows and pocketbooks can be seen in fine gift shops, home furnishing stores, and galleries throughout the United States.

Watercolors are a strong trend seen at Surtex last year and also in Atlanta this year. This is a style that goes well with just about all trends.

We have already seen the emergence of themes like woodland, forest animals, including owls, foxes, hedgehogs, and deer, but we heard people asking for "hunting, fishing & wildlife" several times, so this appears to be a branching out of the same trend: Nature, Earth, Organic.


Birds are still going very strong along with more and more colorful botanical, florals and gardens. Farmhouse has a strong appeal with elements like distressed wood, roosters, pigs, cows and bunnies. And don't forget the dogs, cats and other domestic animals, they are also in demand.


Consequently, the Rustic trend that started a while back, along with Primitive and Native Indian art appear to be stronger, although they are caught into the big mix of what is being called the "new Industrial Revolution" - the Makers Movement. I found a good definition for it:

"The maker movement, as we know, is the umbrella term for independent inventors, designers and tinkerers. A convergence of computer hackers and traditional artisans, the niche is established enough to have its own magazine, Make, as well as hands-on Maker Faires that are catnip for DIYers who used to toil in solitude. Makers tap into an American admiration for self-reliance and combine that with open-source learning, contemporary design and powerful personal technology like 3-D printers. The creations, born in cluttered local workshops and bedroom offices, stir the imaginations of consumers numbed by generic, mass-produced, made-in–China merchandise."
by Adweek.com


Industrial & Urban Chic featured lots of metal, wire, textures and grays or neutral colors. We saw some beautiful hand stitching & embroidered details and natural textures (variations of burlap, twine, bark and other similar materials). Below here you can see a new collection from Cathy Heck Studio featuring their new product line with Primitives by Kathy.

Beaded art was featured by several showrooms, and although is not new, it's being interpreted in new ways.


Another strong trend that has been around for sometime is the Editorial, Sentiment & Inspirational art. This is coming out with more variations, in softer and perhaps more spiritual colors and quotes.


Calligraphy and wedding styles with whites and creams are taking their spot in this market already full of ideas. Fresh and beautiful Paper Cutting art was found in several showrooms. Chalk art is still present although in the descending, it seems. Metallics are the new emerging colors.

Another trend spotted although not new to the market is the Blue Prints, Science & Math one. Very nice, with deep blues and other elements.

Personal & Essential is a trend that comes from Europe. This general trend of very eclectic expressions of all sort features also some colorful Bohemian & Folk mixes. Mid Century is alive as well as contemporary art, with strong, vivid colors over neutrals.


Travel & Places takes a spot in the trendy markets, with maps, scooters, bikes and famous cities or places.

And finally, the traditional Coastal is everywhere but with Mediterranean blues becoming prominent.

I am sure we missed some... we wish we had more time to spend with many more talented artists and creative manufacturers but we ran out of time. To the next AmericasMart Atlanta show!

I saw this video through one of my friend artists on a social media site. I thought to add it here at the end of this editorial as I found it very inspirational and encouraging for those artists who are just beginning in this free-lance & commercial art field.

Posted by Unknown at 9:04 AM No comments:

The 2015 AmericasMart Atlanta - The Nation’s #1 Product Destination, Part I 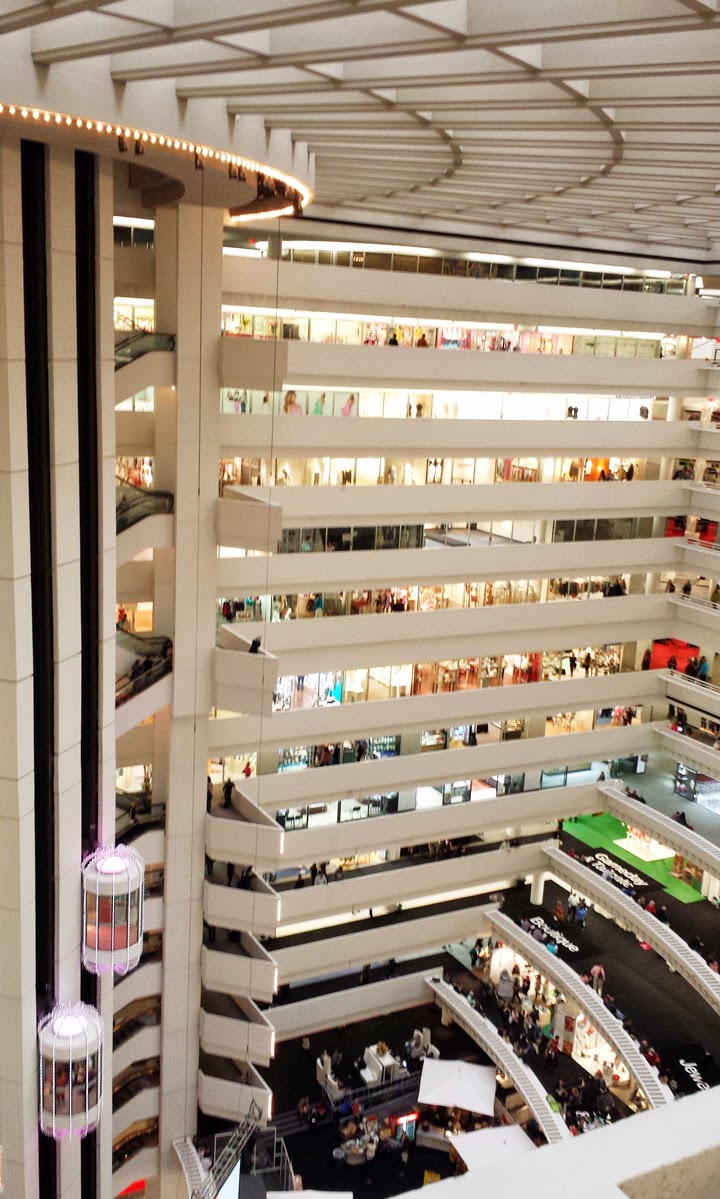 Ming and I just came back from an inspiring and busy AmericasMart Atlanta. What a fun show - so many people, markets and amazing products! I walked the same show in 2013 for the first time and it's still my favorite one.

It's very different from Surtex in that the Mart has over 1,400 permanent showrooms and some 2,500 temporary manufacturer exhibits. This makes it the ultimate market experience because everything is there; three enormous buildings full of all kinds of merchandise on display.

There a buyer discovers the styles that start trends and sees the actual products of an overwhelming amount of brands and designs. In short, you can shop the largest collection of gift, home, rug and apparel in one easy-to-navigate downtown location.

The Mart was very lively and busy as usual but I heard many artists and manufacturers this year celebrating a high volume of sales and successes across the board. We only got a glimpse of so much excitement and with the permission of the showroom owners, we took some pictures to share with you all.

We went by lots of showrooms. We stopped by Jellybean to see my new rugs and meet with Edward Chu, the owner. It's always such fun to talk to him! 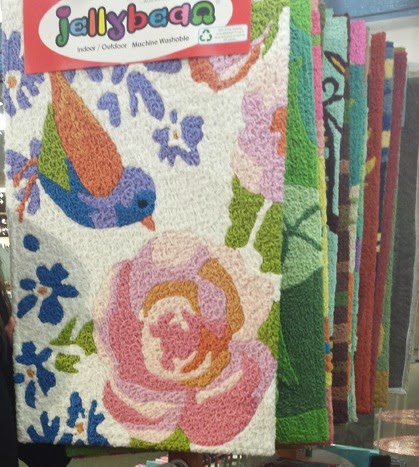 Pictures above and below are © - All Rights Reserved - Courtesy of Jellybean

Midwest-CBK was one of our favorites places and we got a very inspiring tour through their amazing product displays by the lovely Vice President of Design & Creative, Margo Tantau. It was a pleasure to meet her in person! 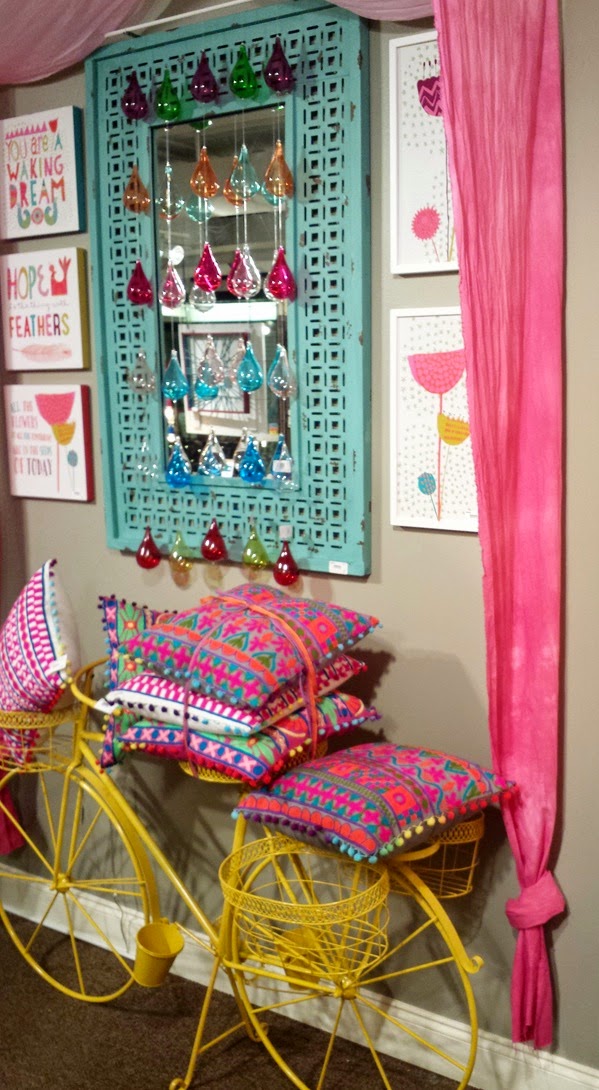 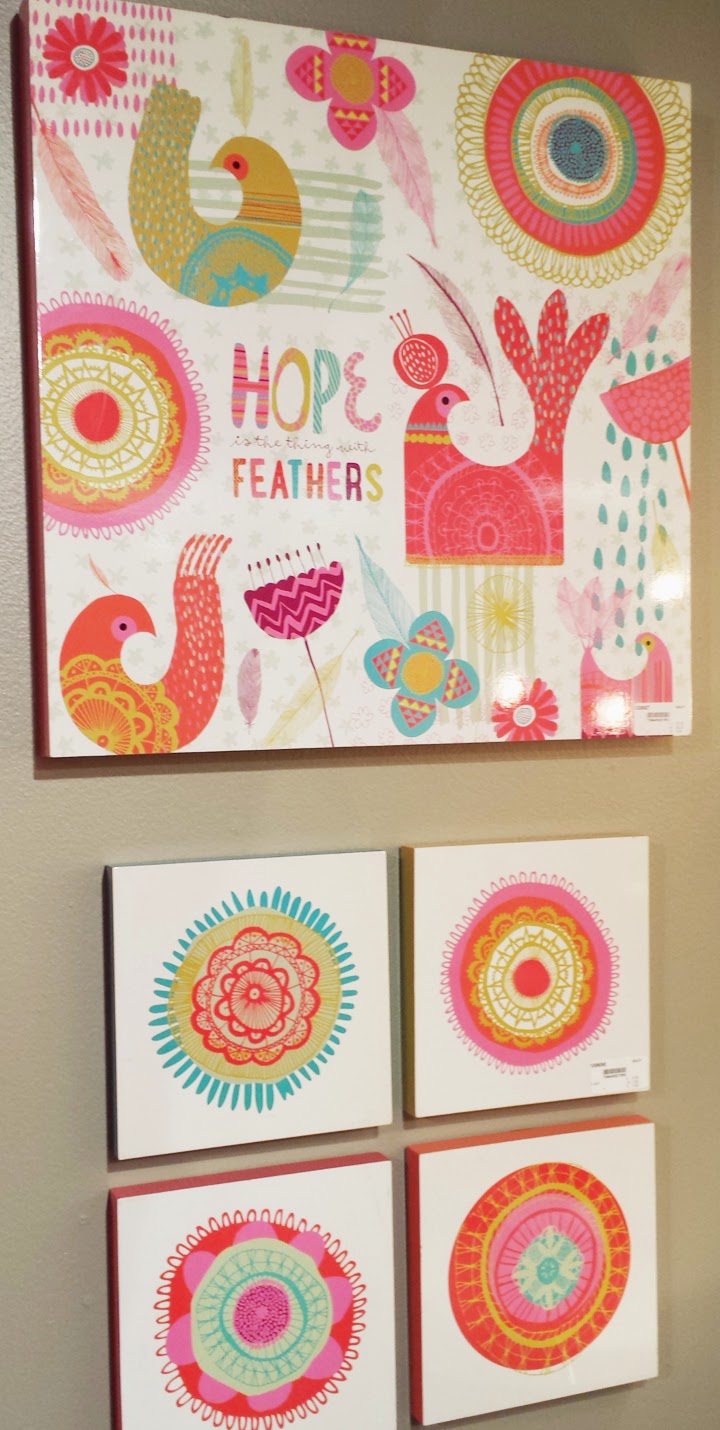 Another very colorful and beautiful showroom was Certified International, where many talented artist products are featured and trends are made. It was also a pleasure to meet the owner! 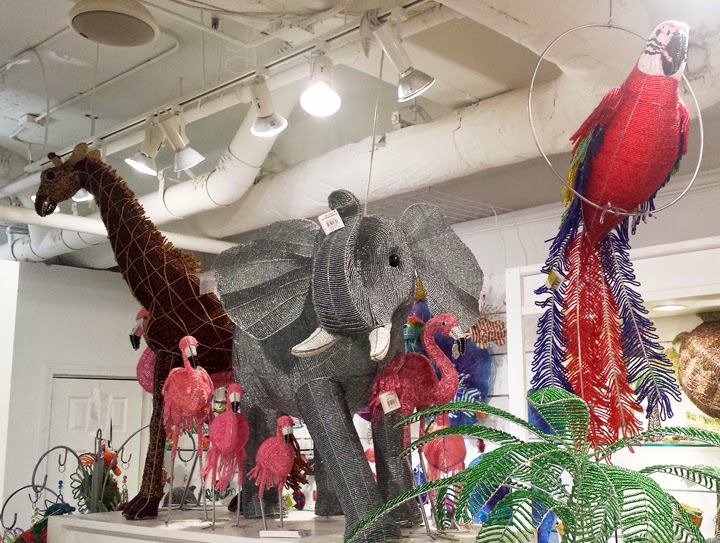 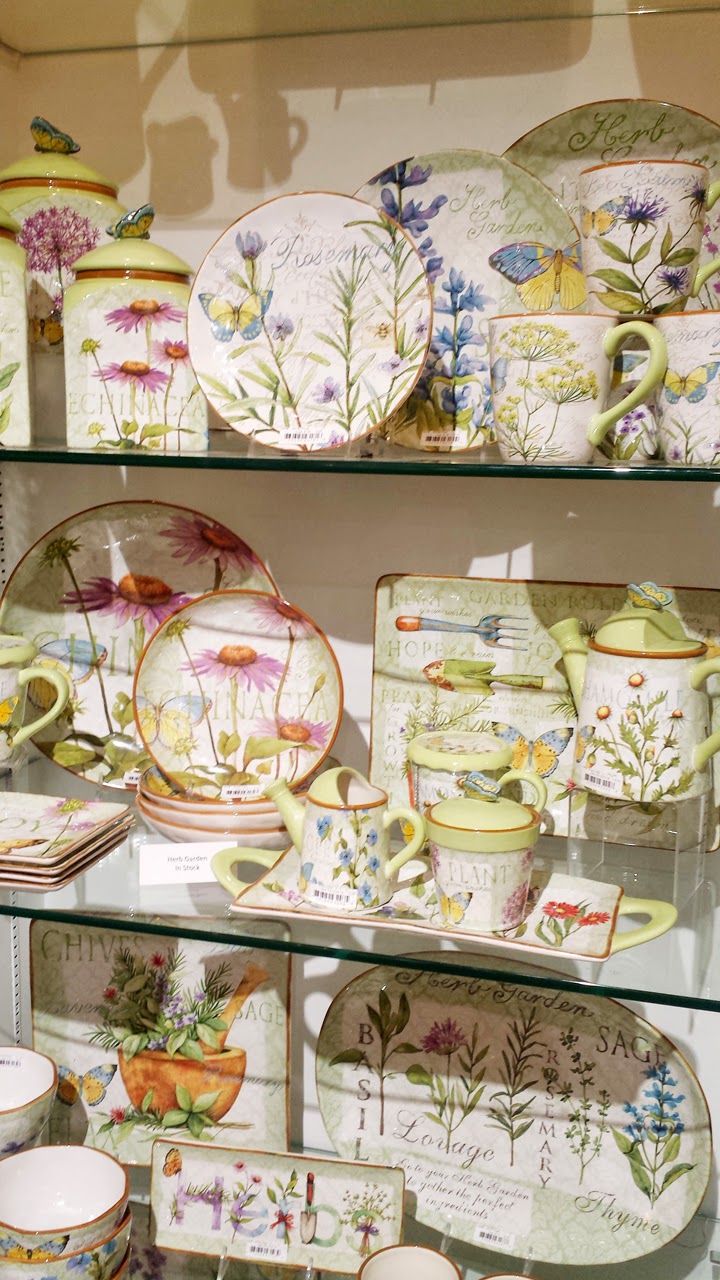 We dropped by Magnet Works, which is now re-branded as Studio M - you can see the official video presentation by the owners, Sue and Curt Todd. It was also great to meet up with Anne McFarland Brown, Director of Product Development, and admire the bright new products that surrounded us. 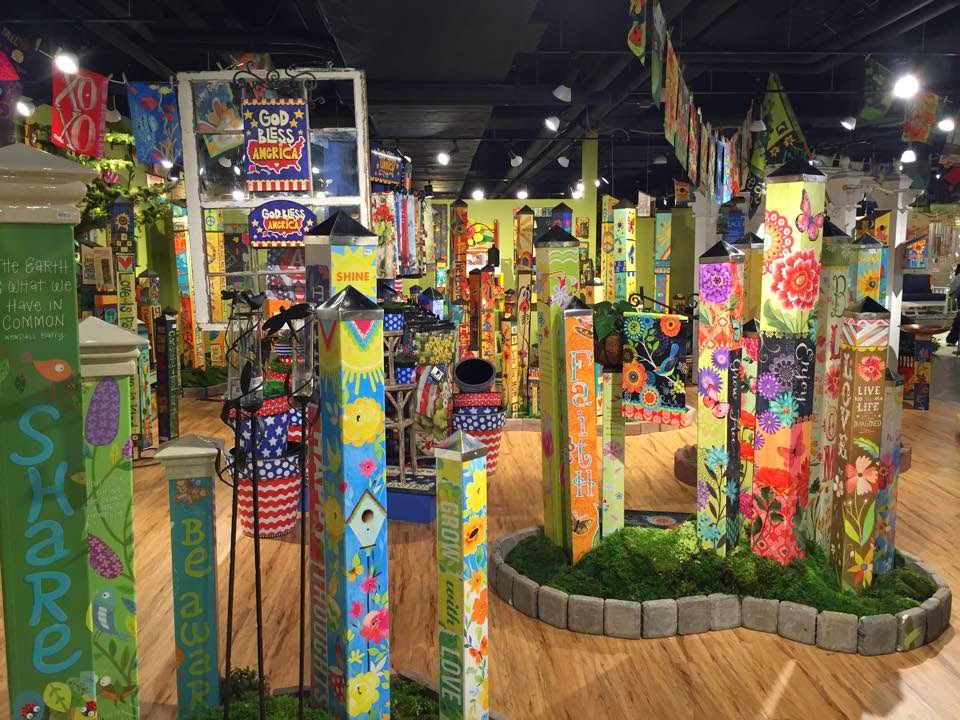 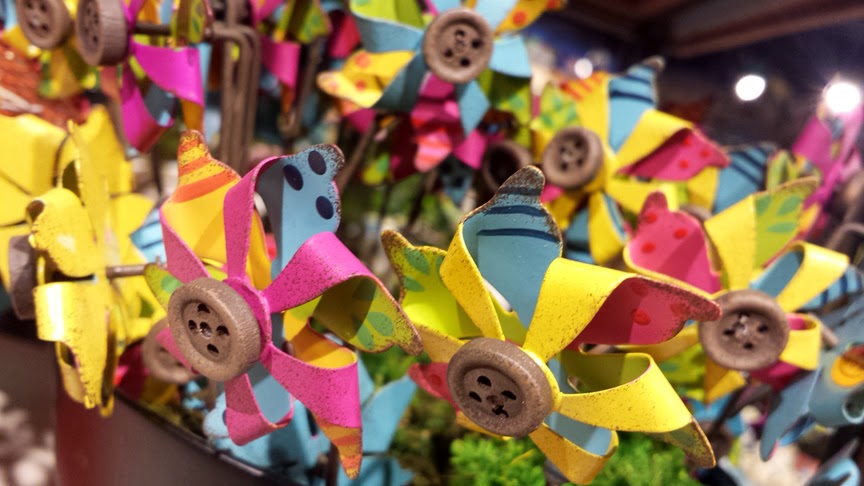 Phil Cowley, Chief Marketing Officer at Design Design Inc. was very kind, too, to take the time to show us the new products in their very fun and colorful showroom. 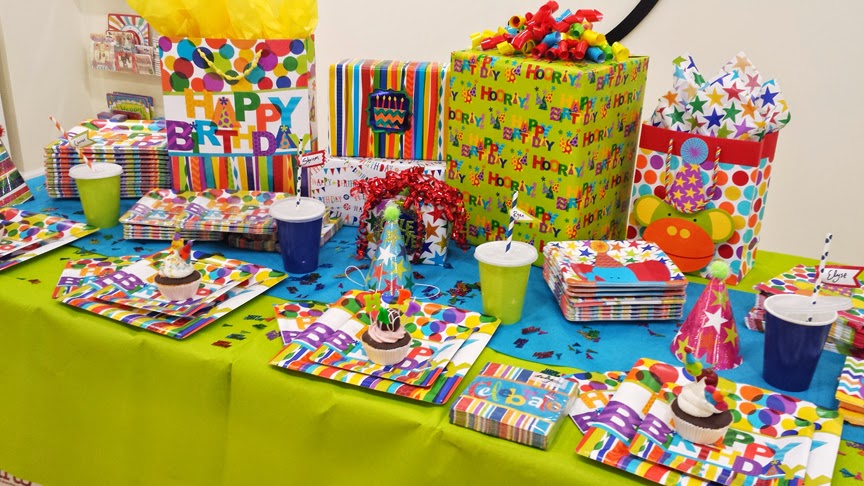 Pictures above and below are © - All Rights Reserved - Courtesy of Design Design Inc. 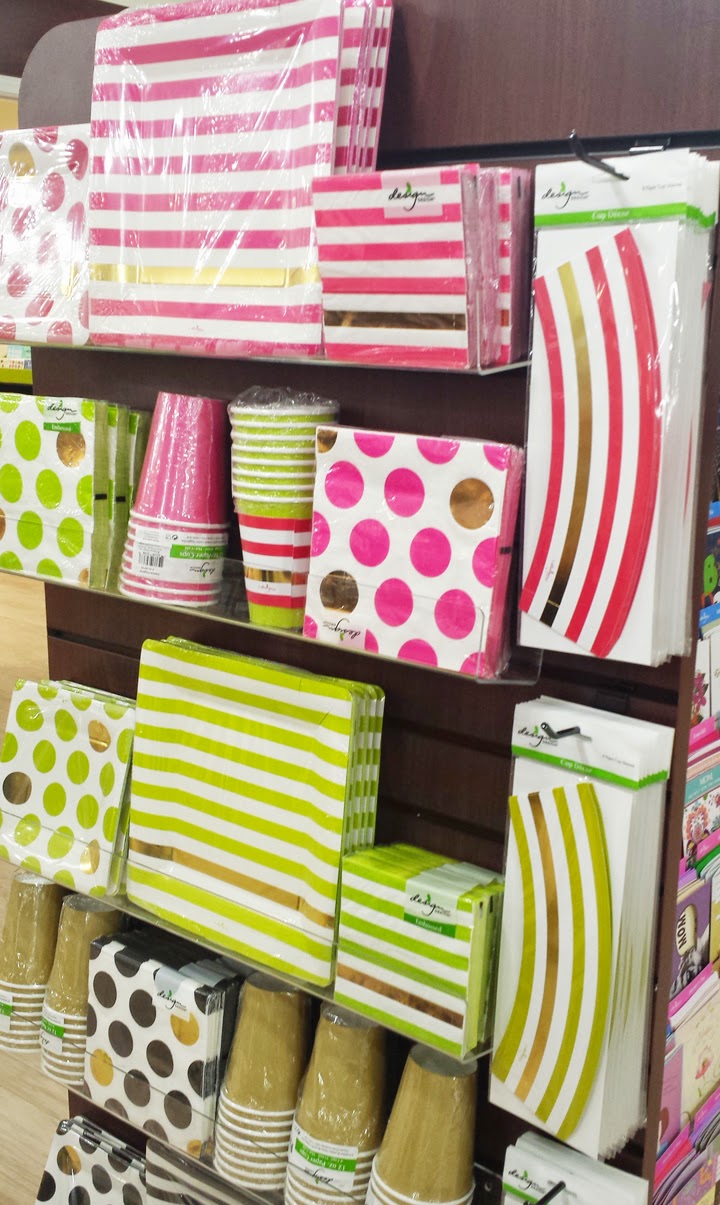 By the end of Saturday we were ready to take a break. It was party time at Leanin' Tree, Inc. so we joined the many artists celebrating their successful show! We met the amazing Susan January, Vice President of the company and took photos of their great displays. 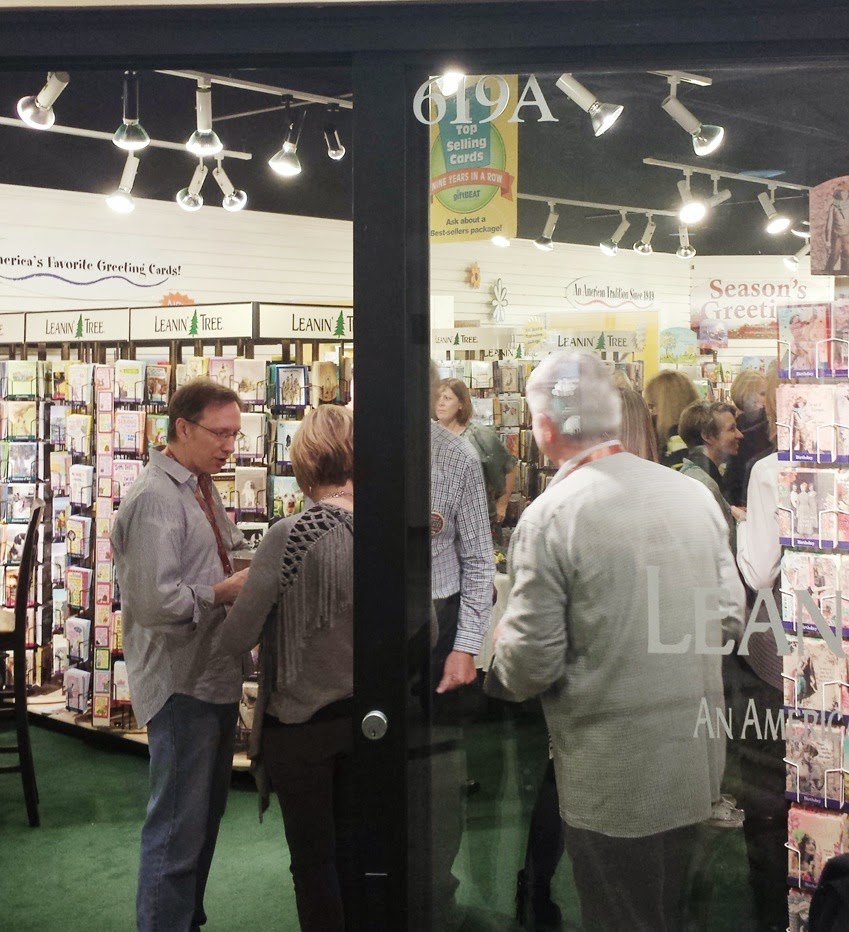 Pictures above and below are © - All Rights Reserved - Courtesy of Leanin' Tree Inc. 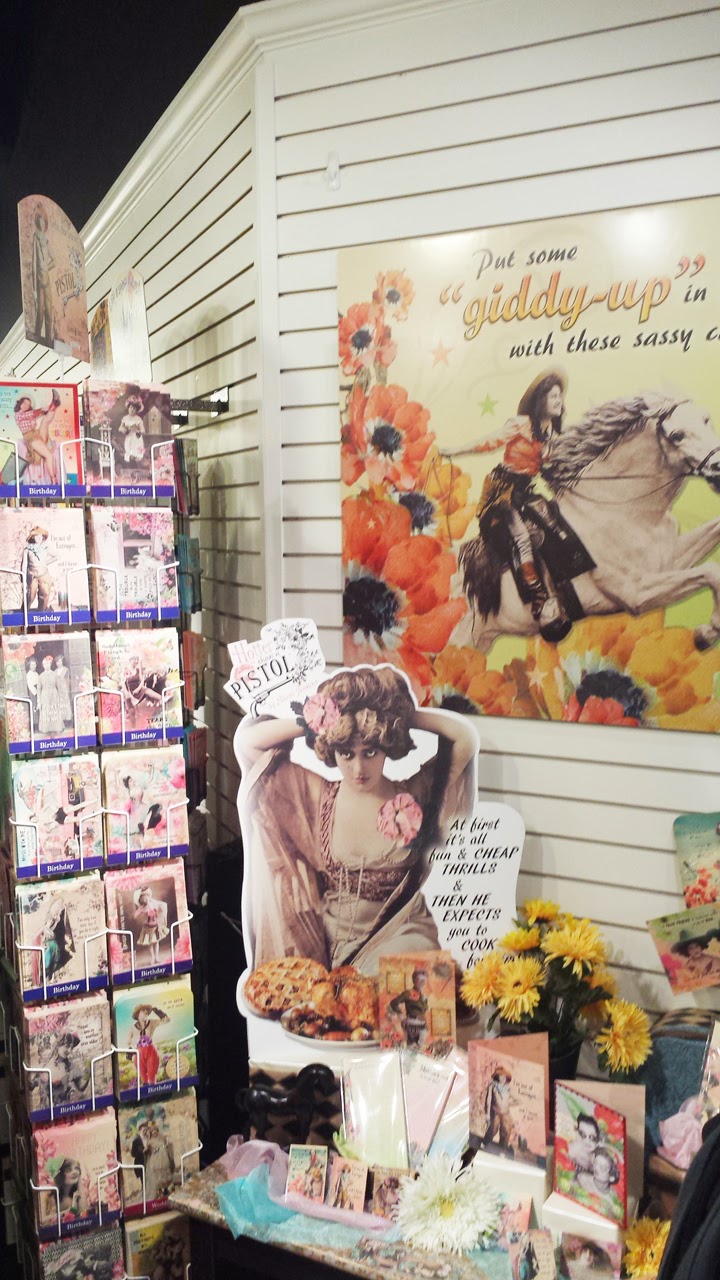 We left Atlanta so inspired and full of industry good news! We hope to share more of our insights next week when we will post more details about the market, artists signing events, and trends - so stay tuned for more! 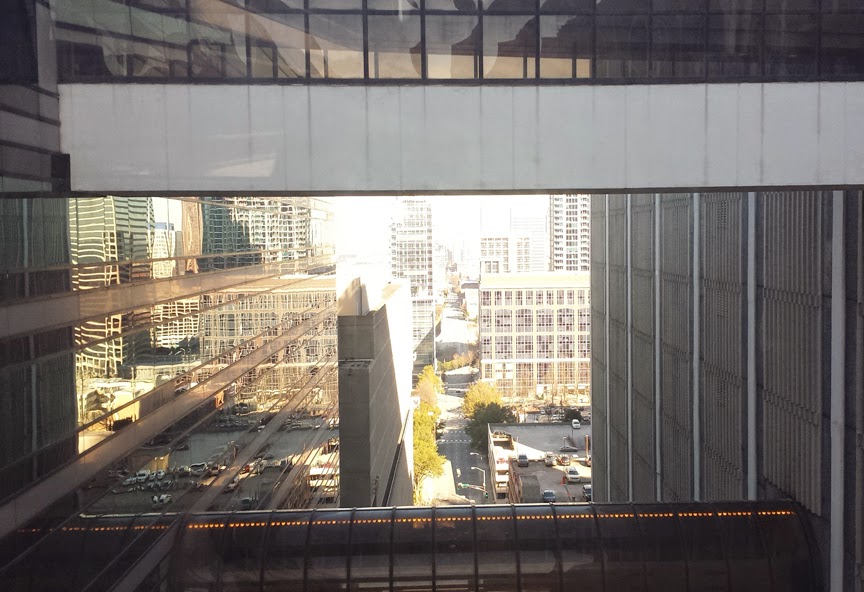 A view of Atlanta downtown from the AmericasMart bridge connecting the buildings.

Posted by Unknown at 7:58 PM No comments: