In recent weeks I traveled to Rome and got to immerse myself in the rhythm of that ancient city for a few days - far too short of a time for such a grand city but still enough to get inspired and reconnect with fine art.

It was equally enjoyable to connect up with Kelly Medford, an American plein air painter living in Italy since 2005. She paints daily and teaches sketchbook journaling. Kelly is also the founder and leader of Sketching Rome Tours.


THE MAIN INSPIRATION BEHIND YOUR WORK: Light.

YOU REALLY LOVE: Riding my bike.

A FAVORITE SOMETHING: Pentalic watercolor sketchbook.

A SUCCESSFUL EVENT IN YOUR LIFE: Being the first foreigner to win 1st place at one of the most prominent plein air paint-outs in Italy.

A FUN MEMORY: Spending my 30th birthday in Granada, Spain
with complete strangers and having a fabulous time. 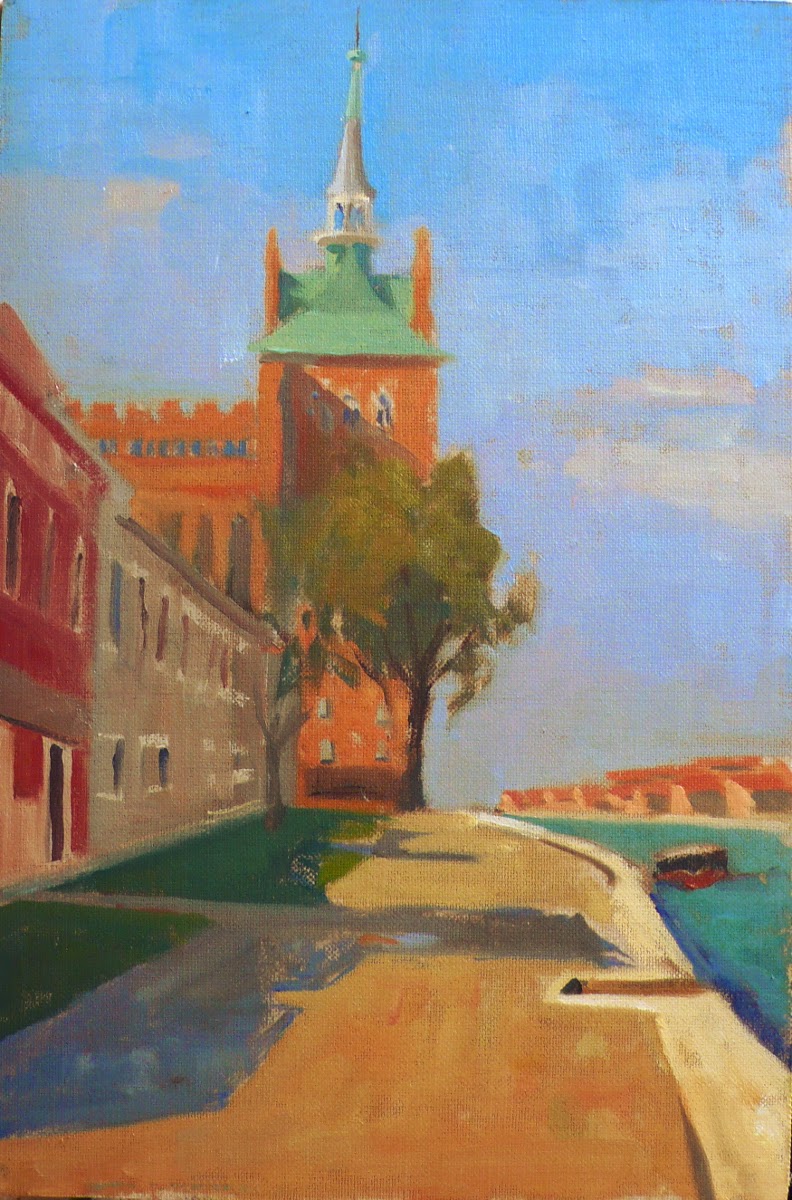 YOUR CONTRIBUTION TO THE WORLD: Inspiring others to create art and explore their creativity. 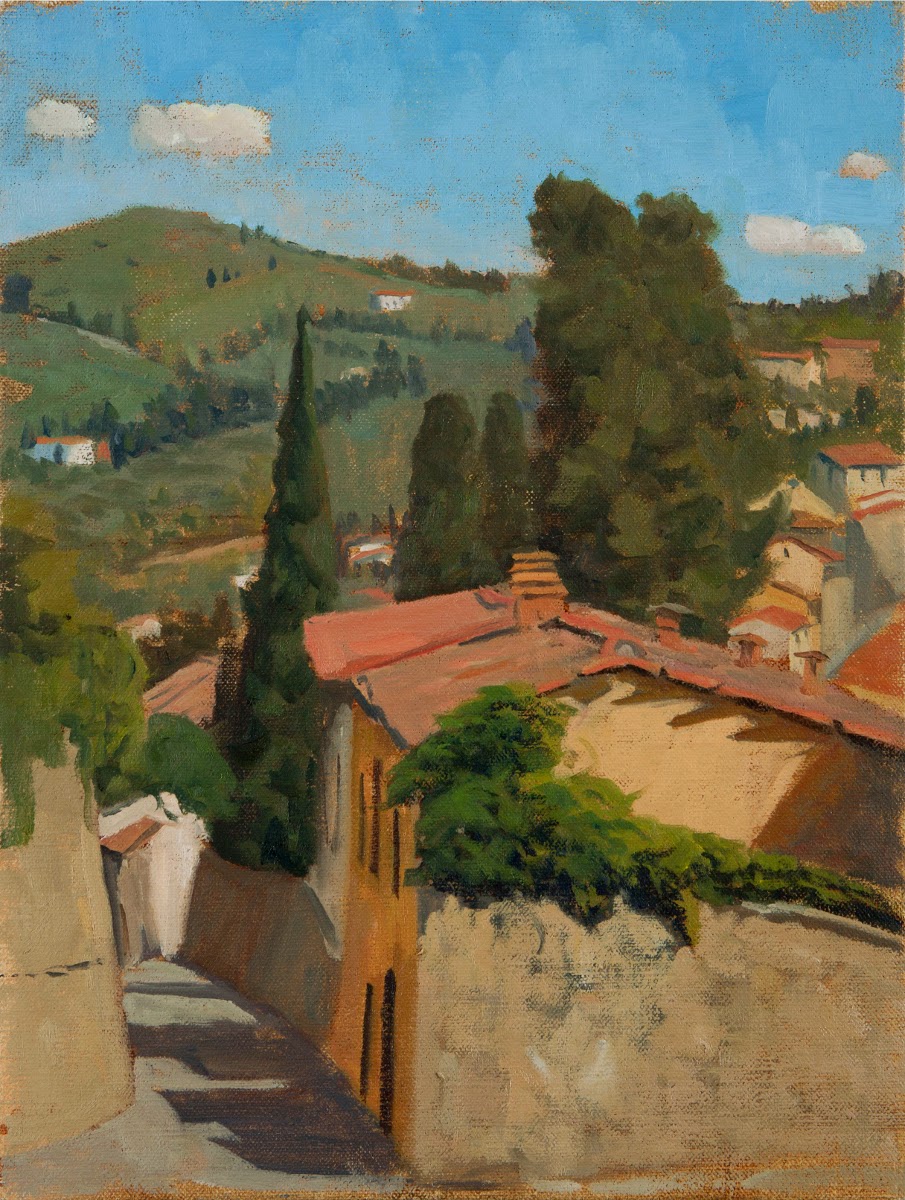 THE NEXT CHAPTER IN YOUR PROFESSIONAL LIFE: To expand sketching Rome tours and urban sketching in Italy.

SOMETHING HELPFUL TO ANOTHER ARTIST: Work everyday and accept where you are while always working toward
a vision of your own personal definition of greatness.

Find out more about Kelly's inspiring paintings and classes here:

I've been away for the past few months taking care of some personal affairs and am just now getting back to business. In my travels abroad I visited a few fine art exhibits, one of which was the Van Gogh - L' Uomo e La Terra (Man and the Earth). It was inspiring and refreshing to see such beautiful works!

Charles is a self-taught architectural illustrator and digital artist from Pittsburgh, Pennsylvania. He specializes in creating intricately detailed hand-drawn pen & ink illustrations of prominent architectural landmarks and colorful digital paintings. Charles' fine art is featured in art galleries, businesses and thousands of homes across the country including the White House.

He created and co-founded his own charity art foundation along with three other prominent Pittsburgh artists. They are known collectively as the Humanitarian Artists of Pittsburgh and donate many of their original fine art and prints for charitable events and fundraisers in their area. For this Christmas season they have formed a partnership with the Salvation Army and WTAE-TV in Pittsburgh for Project Bundle Up - it serves needy children and senior citizens by helping them to purchase new winter outerwear to stay warm during the cold winter months in western Pennsylvania.

Here are some additional notes about Charles and his life as an artist:

YOUR FAVORITE DESIGN/ART STYLE: "Most of my fine art falls in the style of traditional and digital realism. My pen & ink illustration of the Walt Disney World 'Cinderella Castle' has become a favorite amongst my thousands of fans around the world."

THE MAIN INSPIRATION BEHIND YOUR WORK: "My fine art focuses mainly on the history, landmarks, old college mains, steel mills, people and sports of my hometown of Pittsburgh.

YOU REALLY LOVE: "Drawing. I started doing it around the age of seven and set my sights on becoming a professional illustrator at a young age. Over the past thirty plus years, I have created thousands of drawings."

A FAVORITE SOMETHING: "The personal stories which come about as a result of my illustrations and paintings."

I was honored that the president actually took the time out of his busy schedule to personally thank me for the illustration, which both he and the First Lady personally signed. I was told it would be permanently displayed in the White House. Since that time, I have sent a print to each sitting president and will continue to send one to each president throughout my lifetime."

A FUN MEMORY: "A trip that my family & I won to Walt Disney World. Our hometown bank was opening a brand new location and they were giving away the trip as their grand prize. My mother was a bit reluctant to even sign the form seeing how in most cases you never win anything. Then of course with a little Tinkerbell pixie dust, the tide turned and she received word from the bank president that we actually had won. My dad planned the trip around a very rare night launch of the Space Shuttle in late November, 1989. That entire week in Orlando and watching the Space Shuttle launch near Cocoa Beach was magical beyond words and the weather was absolutely spectacular."

YOUR CONTRIBUTE TO THE WORLD: "My illustrations and paintings have become a part of me throughout my life and each creation has its own unique identity. It is rewarding to know that you are creating your own history and to know that your art is displayed in thousands of homes. I would hope that the fine art that I create continues to capture people in profound and meaningful ways and inspires others to make it their life's work as it did for me."

THE NEXT CHAPTER IN YOUR PROFESSIONAL LIFE: "I'd like to continue drawing and painting and work more towards creating partnerships with companies who would be interested in licensing and publishing some of my work."

SOMETHING HELPFUL TO ANOTHER ARTIST: "As with anything in life, if you have a passion for what you love to do than you have already won. You should be willing to put all of your energy, time and fortitude into realizing your dream. It is possible to be successful as a professional artist but it often does take patience, time and the right connections. Do not ever give up regardless of what anyone might say to prevent you from becoming the success you dream of and that goes for whatever path you decide to take in your life."

Find out more about Charles and his fine art at http://steelcityartist.com

Posted by Unknown at 9:05 PM No comments: